Back to News @en

The history and future of a great enterprise can be told with a drawing and this was proved by the first Drawing Competition organized by Artoni Trasporti to mark the 80th anniversary of its establishment.

86 drawings were sent by all the Artoni branches and , watching this video, you realise just how imaginative children are by merely leafing through them. For a child, a truck can turn into a submarine, a ladybird, a mole or even Santa Claus’s sleigh.

The winner was Matteo, aged 12, but a prize went to all the participants, because everybody had won. 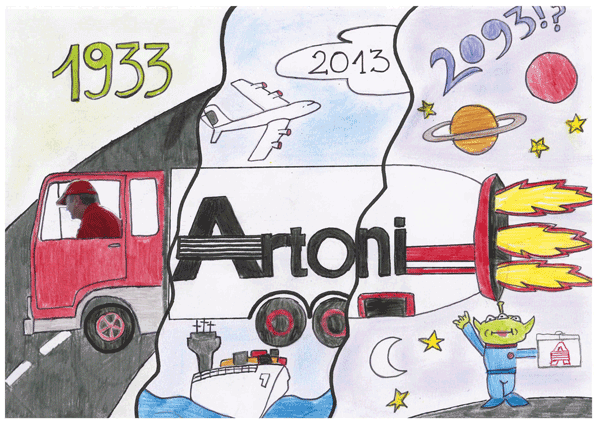 Matteo cleverly linked Artoni’s origins, the red truck dated 1933, to the present day and the new global visions of freight forwarding and logistics. Then he dreamed, and this was the spirit of the competition. He dreamed of 2093 and the truck turned into a spacecraft able to consign goods to aliens as well.

From Earth to Outer Space.. a dream that’s been going on for 160 years.

Voted by all the employees and selected by a jury, the drawings will become the basic images for the 2014 Artoni calendar and will also be made into a book.