Back to Press release

Launched by Caterpillar, Rai Radio2, “M’illumino di Meno”, the most famous Energy Conservation and Rational Energy Use Awareness radio campaign, is now in its 11th edition and Artoni Trasporti supported the symbolic “energy silence” initiative during Energy Conservation Day, 13 February 2015, asking its employees to unplug the personal computer and charger, and by distributing the list of “Magnificent Seven” energy saving tips in the office and the funny game “The Sustainable Kilowatthour”, based on good practice to save energy.

Artoni Transport celebrates thus 2,800,000 Kw / h produced in the last four years thanks to the 5,700 square meters of solar panels installed on the roofs of their stores. 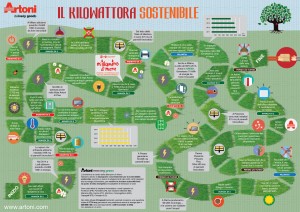