Back to News @en 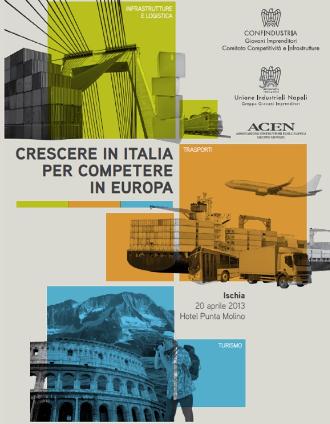 Meeting “Evolving in Italy so as to compete in Europe”

16 April 2013  – “Evolving in Italy so as to compete in Europe”. This will be the underlying theme of the meeting to be held at Hotel Punta Molino, Ischia, on 20 April. An appointment organized by Confindustria’s Young Entrepreneurs in collaboration with the Employers’ Association of Naples and ACEN (Builders’ Association of the Province of Naples) with Anna Maria Artoni as one of the speakers. Renzo Iorio, president of Federturismo, Luigi Merlo, chairman of Assoporti and Vincenzo Soprano, managing director of Trenitalia will be among the protagonists of the debate entitled “Italy today for the Europe of tomorrow”. The event will focus on specific issues: infrastructures, logistics, transport and tourism must become key elements on which Italy’s growth in production must be based. Taking this as a starting point, the Committee for Competitive Advantage and Infrastructures of Confindustria’s Young Entrepreneurs division has organized a workshop in Ischia in which entrepreneurs, technicians and institutional representatives will take part, with the intention of promoting a new cultural approach able to seriously focus on Innovation as founding principle for redesigning Italy with a competitive edge. Other participants will include Nichi Vendola, president of Regione Puglia, Nicola Chiodi, president of Regione Abruzzo, Amalia Sartori (President of the European Parliament’s ITRE Commission) and Vincenzo Caputo, president of the Young Entrepreneurs division of the Employers’ Association of Naples.